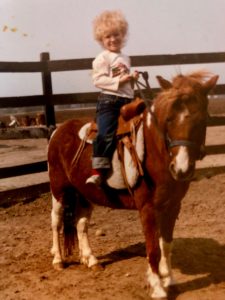 This girl doesn’t worry about your opinion of her pony.

This girl is not concerned with the adequacy of her clothing, or money, or ability…and she certainly isn’t concerned that her mother for some unknown reason, thought it necessary to perm her hair.

It would be years before she would fight for the rights to her own hair.

But this girl is wild. This girl will mess up your house and eat all your food. This girl knows clothing is an option, but not a good one. This girl is always dirty and mostly jumping on things. This girl is a perfect little hedonist. She wakes up to play, eats her fill without guilt, and rests without making excuses.

She hasn’t yet realized the things she won’t be good at…or that being an astronaut or a mermaid is off the table.
She doesn’t know that fractions are hard and that prom is, at best, disappointing.
She doesn’t yet know that her clothes, her looks, and her grades will determine who wants to be associated with her.

But, this girl…right here…she knows…every hurt and disappointment. She knows every disapproving Baptist look, and every girl she wished she looked like, She remembers every boy that punched her in the stomach or threw her into a wall…or worse…ignored her. Every time the longing to be included was met with exclusion.

She knows the world is broken.

We are born helpless into brokenness. We are born flawed physically and spiritually and from there, we tend to navigate poorly.
Some are allowed stability and ease; some are born into depravity, and many, are somewhere in between.
But in every childhood there still exists a kind of freedom unrestricted by self-protection, an ability to be present and a joy that is not yet mixed with sadness…that has to be close to heaven.

I love this girl.

I know what she’s in for and yet I still don’t know what awaits her. What I do know is that she is unconditionally loved and fearlessly accepted. I know that regardless of what is done to her or what she does, she is protected and forgiven. I know she will love and lose and fail and fear, but I know God is a good father who gives good gifts and doesn’t waste the suffering of His children.

And even if she suffered a little she would enjoy far more grace than is common. That girl rode horses and swam all summer. She traveled the world. She had deep friendships, good health, and sound sleep.

Bad will happen. Live long past childhood and it is inevitable. It is when we learn how dark the world is that we can truly appreciate what is light. If nothing has been bad enough for you then I find that nothing will ever be good enough.

This girl looks back on that girl with gratitude and perhaps a little loss, but looking forward, can only smile at the future and perhaps demand another pony…

After what was for me, a fairly brutal week, I am driving downtown to the Volunteers of America building where they house their “Fresh Start Recovery” center.  It is a relatively new and desperately needed program where the mothers of opioid addiction are allowed to keep their children through the grueling process of recovery.  It is a beautiful provision in an ugly situation.  It is by grace alone that I have been allowed to work with these women who are far braver than I will ever be.  It is a sweet breaking of my heart, and a bitter reality to face.

I’m wearing a shirt my husband, in his kindness, had made for me, per my specifications, featuring our logo and the word “FEARLESS” embroidered on the front.  I had wanted our ministry to project boldness in a broken world…at least that was my intent…but, as I drive, I am filled with what I can only describe as fear itself.

As usual, I left the house in a series of random scurrying movements, always underestimating the amount of time it takes me to do basic things. My dog-owner guilt is in the red as I leave Sherman without a walk, suffering from an ear infection and food allergy that is costing me more money than I have.

The week behind has been filled with boxes checked and schedules filled.  I completed a certification exam I had expertly procrastinated and had long been dreading.   We had our very first board meeting as a fledgling non-profit.  Up until this point, I had no idea what “bylaws” even were and, after sitting through a two and a half hour meeting Wednesday night, I am discouraged to think that I still don’t really know…I’m cold, I’m behind at work, I’m tired, discouraged with feelings of inadequacy, and despite my best efforts, crying.  Ah yes…just what everyone wants to see as they roll up alongside someone at a stop light…a messy haired, pasty complexioned, white girl… weeping…claiming to be FEARLESS…inspiring.

148 ministries began as a quietly held breath in my mind over 2 years ago as I sat one morning at 4 am in the middle of reading a book by Christine Caine called “Unashamed.”  I had found myself in a circumstance I never expected to be, in a place I didn’t want to be, and working a job I had told myself I would never again be working.

There I sat, divorced after 9 difficult years, in Michigan, on a horse farm.  In those small morning hours, I would read, or pray, or cry, or do all three at the same time in an unexplainable feat of emotional acrobatics.

There, for the first time, I became aware of the trafficking exploitation of women and children with all of its global proportions, and its moral implications.  And like waking up to a sharp pain, I adjusted my cramped, narrow position.  I am not formally educated, I am not degreed, I am not even easily focused, and yet in that moment I knew I wanted to use the only thing I knew, as the Lord chose to lead, to serve in the healing of His daughters.  As I turns out, I understood only too well the scars of physical and emotional abuse, about the self-inflicted lies that bind all women in fear, and the healing, proving ground that physical stress and unconditional support could have.  I did not know how or when, but I did know God was speaking there, and admittedly with some fear I trusted that He knew the plan, and that it was to give me a future and a hope. (Jer 29:11)

Still a bit sulky, I haul what feels like 497 pounds of workout equipment onto my person and trudge through sloppy snow to the front door, I’m buzzed in by the always cheery attendant, and without a hesitation force an equally cheery face that must have been on retainer for such occasions as this.

I rush to clear the all-purpose room of tables, I accidentally set off an alarm that could wake the dead, and follow that up by locking myself out. I am helpless as I wait to be rescued from the hallway…ln defiance, I crank up the grittiest Christian rap I can find on Pandora but get annoyed by it and land on a fairly clean station featuring Jenifer Lopez…whatever…I’m not proud.

Around 10 minutes past the time I have been scheduled to start, girls uncommittedly filter in.  There are six.  Two are quiet and look like they hate me.  One is pregnant.  Two others are uncontrollably running around and disorienting the equipment I strategically laid out. One leaves because she has reconsidered her choice of pants…she may or may not return. None of them have reasonable shoes.

They are unconditioned, unmotivated, and pretty unimpressed by my attempt to share my love of fitness.

We sit stretching in a circle on the floor.  Some tell their story while I fight for the ability to relate.  I cannot.  I am out of my league here too.  I ask if they want help with workout ideas they can do without equipment, if they have questions about nutrition or weight loss.  Some do.  I ask if they have anything they would like me to pray for or with them.  In doing so, I am asking them to give me the privilege of their trust I don’t yet deserve. Some do, and I pray with and for them.

They filter out. I pick up the 497 estimated pounds of crap I hauled in there…somehow its lighter…and leave the building without setting off an alarm this time.

I sit in my car and exhale that quietly held breath.

I am not without fear.  I am not without anxiety, sadness, anger, or complete disorientation.  Somehow I thought this would be easier, but I had no idea just how perfect.  No idea how an incomprehensibly good God could use my clumsy effort to show a few women on a Friday afternoon that hears them when they pray.  148 Ministries was a thought placed by God, a path provided for by God, with a human effort protected by God.  I know for sure just how insufficient I am, but I also know just how sufficient He is.

Driving home, I know there is infinite work to be done, plans to move forward and expand and to step into a mess I don’t even understand.  Tears start to fill my eyes again, but this time with the overwhelming recognition that I just got schooled in His undeserved faithfulness.  God provided a way for the last thing and He will provide a way through the next thing.  I can step forward, not without fear, but in spite of it.  Not because I am good, but because He is.  Not because I am strong, or smart, or steady under pressure, but because He is steadfast, and patient, and He works all things according to his purpose and timing.  In that promise I can rest fearlessly.