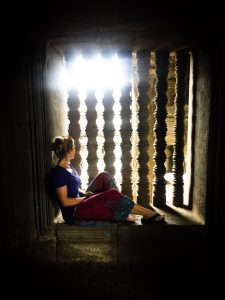 Occasionally, my generally content, mostly grateful heart becomes generally, mostly unsatisfied.   I experience a laps in what most would consider “good character” and occasionally I feel what most would consider to be something akin to “ungrateful entitlement”…This bothers me about myself.  Perhaps I am confessing as a way to finally kill my private darkness with light, but I thought I’d tease out shameful behavior in a shamelessly public way.

In these moments, I tend to think about what it is that I am and what it is I have and hold it against what I should be and am not.  Simply put, I compare what I have learned from the world around me as the standard of awesome, and recognize that I fall embarrassingly short of the mark…which, I suppose, is a normal human thing to do.  What unsettles me about this undesirable comparison is that without anyone else in the world to have anything different than what I have, I would never ever think to want anything else.  I have all that I could ever need, I am cared for, I have clothes, I have food, I have shelter, I am really, generally, fortunate.  I have crazy amounts of undeserved blessing.  I am every day humbled by grace and everyday blessed with abundance…and yet….The thought that other people might not think I’m blessed, or  awesome, or significant, really just nags at the ugly parts of my soul.  And whether you like it or not, I am going to assume that you do this as well…or social media as a dominating force in this culture would not be a thing.

I sat at dinner the other night with my husband, and, as I generally do, asked him annoyingly weighty questions like, “If there were anyone else you could be, would you quit being David Storvick and go be that person?”….also, “how many burgers do you think I could eat before people started judging my ability to process emotions in a healthy way…?”

His answer, “No one…and, about four…”

Of all the wealthy, fabulous, fancy people I have known, I wouldn’t ask to be any of them…so why would I envy what they have or feel “less than” what they are?

There are very few people I have met who, once knowing them, I would change places or circumstances with.  I have traveled to places of extreme poverty and obscene wealth.  I have known and worked alongside the struggling factory worker, the Pakistani refugee, the independently wealthy child of an even wealthier father, the missionary, the single mom, the trafficked orphan, and the spoiled brat.  I have spent time in Papua New Guinea, Israel, Egypt, Qatar, Jordan, Cambodia, Ireland, Scotland, and Greece.  I have worked for family farmers and for wealthy sheikhs.  As I have watched their lives lived out, witnessed their character, shared their space, there is not one I can say has any more peace and purpose than I have.  I would not want their power, and I would not choose their path.  They are as flawed and floundering as I am.  They have perhaps different problems than myself, but they are all essentially hopelessly fighting their own version of discontent.

The very rich are as miserable as the very poor…except perhaps even more so because they have exhausted all the resources the poor can only hope for…and there is something in the hoping they have lost.

One country is as corrupt and violent as another except where it benefits the powerful to keep relative peace.  While America is full of the fairly entitled and is mostly distracted by nonsense, I still like it the best, because the water is fairly safe and the infrastructure is mostly reliable.  So you see, there is no amount of being anyone else or living anywhere else I should possibly long for.

When I slow down enough to think about the “why” for more, I usually stop before the truth…not today.

Why would I want more money? What would I do with it that would bring me more joy than I have right now?  It stresses me out to think of how to get it, keep it, and who to leave it to when I’m dead.

Why would I want to have a different body or be more attractive?  What is the point other than the manipulative power that comes from beauty…It is a currency that evaporates as soon as you are savvy enough to use it.  The value of beauty is that it is only ever valuable to others, and often enslaving to its bearer.

Why would I want a bigger, nicer house other than the envy it incites and the status you’d assume?  I don’t like entertaining, and I don’t have time to clean it.

When I think about why, I am ashamed to think I thought it at all.  When I have all that I need, could the reason that I want more be that what I really want is for you to think I am more awesome than I really am?…gross.

Just as penance, I am right now laying what is true out there.  Quite literally, I have nothing.

The only material wealth I have had as an adult, I have had because the man I married is educated and a good provider.  There is very little that I possess that is due to my ability to earn what the world says I should have to be at such and such a status.

This was never more obvious than when I went through a divorce a few years ago and was left with the nothing I had come into the marriage with.  (side note: if a lawyer divorces you, get a lawyer)

In a western world where most are entitled to so much paid vacation time, 401k matches, and weekends off, those things are only unicorns to me…magical, and above my pay grade.  I grew up quite poor, I have no formal education beyond high school, and the vocational path I chose has been a rugged series of roots and crevasses, and not the structured and predictable corporate ladder.  As a result, sometimes, while struggling over a particularly unwieldy root, I stare with longing at the lives of those who have what appears to be stability.  Deep down, I understand that there is no such thing as “safe” and that stability is a fantasy… but it is a fantasy I would sometimes very much like to get high and live in…sometimes.

So perhaps the discontent I sometimes feel is more about what I  want you to think of me, rather than what I actually think.  Could it be I am more concerned with you thinking I’m happy than actually being happy?  Could It be that what I want is respect whether or not I am respectable?  And is it possible that what I desire is honor, instead of humility in the presence of a God who gifts it all.   If that’s the case, and I’m afraid it may sometimes be… then I have some business to do with this particular character flaw.

I hereby release the effort to make you think I’m awesome.

I release my horrifying desire to be envied and honored and even elevated.

I release the image I wish you’d see rather than the reality of my reflection.

I release the strength I pretend to have.

I release the intelligence I project when I’m fairly uneducated.

I release the hypocrisy of projecting myself as a “good person,” when I know that I’m really not.

I release the god’s I’ve made of the worlds opinions, and the worship I give to temporal things.

It is when I let my gaze drift that I find the discomfort of my discontent.  It is when I choose to look at a fantasy.   It is when I take my eyes off of the purpose of my own life and with no small amount of insolence ask God for more.  I have seen enough to know it’s a phantom…I should know better.  I should know enough not to chase wind.  Ecclesiastes says “All things are wearisome…there is nothing better for a man than to eat and drink and tell himself that his labor is good. This also… is from the hand of God.  For who can eat and who can have enjoyment without Him?”

When I look for enjoyment from creation instead of the creator, when I look at shadows of perfection instead of a God who is perfect, when I chase wind, I always end up unsatisfied and weary.  In these moments, I remind myself of what is true.  I slow down enough to notice that I have all that I need and have been created to be nothing other than what I am.  There is nothing better…and that’s pretty awesome.