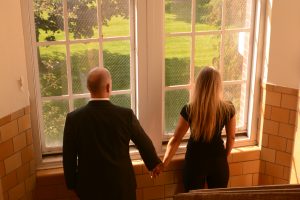 Again today, as all the feverish work we have done over the last three months becomes the temperate road ahead.  Not so much easier, but consistent and forward.

David is kept in a state of constant evolution, working a steady second job that steadily allows us to pay the mortgage.  Chris does what Chris does and works at all hours of the day while occasionally irritating me with impromptu budget discussions and the very unromantic side of paying for a new business.  I press through the day,  fitness classes at 5am whether anyone shows up or not, clients, a very glamorous cleaning job, and the selling of my own plasma for grocery money and, secondarily, the benefit of anyone with coagulation issues.  There it is.  The very exotic life of three social entrepreneurs who love Jesus and feel like life is better when lived out in service.

As we go, we cut a path.  The further in, the more entangled our purpose becomes with the purpose of those around us.  The further on, the more we see how a broken world seeks to break what is weak in us.  Anymore, I only see clearly when I look behind and realize that the path had been cut for me…that it was never about me…and that is sometimes a relief, sometimes a bummer.

I considered the potential of partnering 148 Ministries into a brick and mortar existence as 148 Wellness with a muddy mixture of unwavering confidence and absolute uncertainty.  Confidence, that even my bad decisions are malleable to the kind of God that uses foolish things as teachers.  Absolute uncertainty of what this process would even look like, what life would look like, what the heck whatever we did would look like…

What would a business with the heart of a ministry even look like?

Several weeks in now, I keep discovering uncharted difficulty and unexpected clarity, but I also keep going.  Still confident.  Still uncertain.  We all just continue to take the next step, do the next thing, engage the next fire.   Overwhelmed with gratitude, and literally crying from uncontainable joy at so much undeserved favor, and in the next moment crying because I’m tired, and stupid, and whose idea was this anyway…

It does not feel like I thought it would feel.

Somehow as the process began and each door opened into another, I simply walked. Cautiously optimistic. Woefully naïve. Wonderfully simple. It was only in the walking that I found the direction; only in the stepping did the ground form underneath to support the weight of each footfall.

I had a dream many years ago of opening a gym with the mission of building up women broken from a world of abuse and misdirected worth.  Now alongside a pastor and a PTA we have a gym that does that…and more.  Somehow, It’s better than my dream.  Somehow, what I thought would be hard isn’t as hard as what I never once thought about.   The attacks come from the sides and within…never head on…never straight forward.

There was something still in me that thought doing a “good thing,” following God’s prompting, building a dream, serving a purpose, or whatever you want to call it,  meant that the “good” and “godly” in this world would be excited and supportive, cheering their fellow soldiers on.

Something told me I could discern who was “good” and “godly.”

Something in me must have also assumed that the personal struggles with my own character flaws, family dysfunction, and chronic tardiness would somehow fade behind the heroic mask of purpose.  All at once, every insecurity, every lazy habit, every fear would just dissipate like some kind of vapor.  All at once, I would be competent with an Excel spreadsheet.

Something told me I could do this.

Something told me I could not.

Somehow I must have had the idea that stepping out in faith would smooth the road ahead.  I have never considered myself a “good Christian” and things always seemed to go poorly for me as a matter of consequence.  This time though…was different…I was different.  My heart was different.  Somehow in my head that meant that surely goodness and mercy would follow me all the days of my life.  Good friends would draw closer and share the vision. All conflict, if any, would be resolvable. People would like me. My character would be above reproach. My marriage bonded even tighter with the chords of a working partnership. I would lose ten pounds but not even care, and it would all be under budget…because Jesus.

…None of that happened.

The road ahead is still only revealed one upward step at a time.  Friends have pulled away; bitterness and questionable motivations are always hunting us. It is now even harder to make time for family.  The time suck of conflict has emerged from the stupidity of miscommunication.  I can’t make anyone like me.  I still have anger issues. I’ve been eating products that could outlive me through some wizardry of the food industry called red #5, and the other day David and I had a legitimate kind of fight about the sequence of room painting.

This just doesn’t feel like I thought it would feel.

It is, however, better.  More risky, more unstable, more of what I already don’t have enough of, but infinitely better.  I only get the next step by taking the first. I only get to see what is wonderful when I wonder what is next…and I have seen some really wonderful things in the last few weeks.   I could have spent the rest of my life asking for a presentation of the path and the purpose, But God only seems to be interested in showing me as I go.

He doesn’t work like I thought He would, but as I go, I get to watch what is otherwise overwhelming become a simple step…and it’s so much better.